FRI dusts off its long-unfulfilled dream for a rec center

For years, a grassroots organization known as the Ferguson Road Initiative has waited for the cogs of the global economy to start spinning again so it can revitalize an old vision to build a multi-generational recreation center.

Although the area sits on the outskirts of East Dallas, it’s vital to the success of our neighborhood, says FRI president Vikki Martin.

“We have been looking out for the backdoor of Lakewood for more than a decade,” she says. “If you’re going to build East Dallas and make it stronger, you have to build all quadrants.”

FRI began more than a decade ago with the mission to “transform Far East Dallas into a safe, beautiful, prosperous and proud community” through economic revitalization. It covers the stretch of land from Garland Road to Mesquite from Interstate-30 to I-635, including parts of Forest Hills, Casa Linda, Casa View, White Rock Hills and White Rock East.

Since the opening of the White Rock Hills Branch Library on Ferguson near Buckner in 2012 — a success the initiative helped champion — the organization has been relatively quiet.

Now FRI is on the move again, stirring the neighborhood to once again create developmental and economic progress along Ferguson Road. 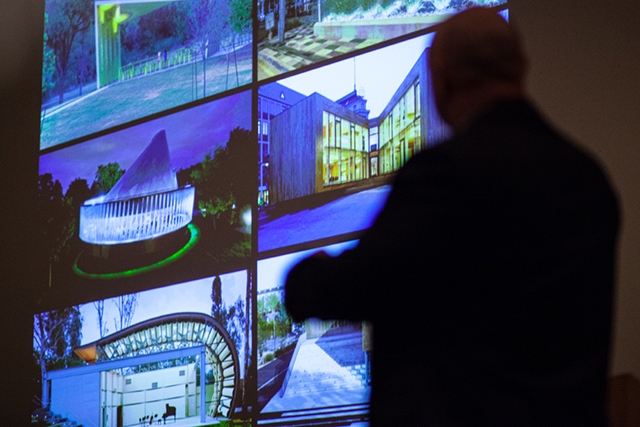 Chad St. John, Jacobs Landscape Architect, runs through conceptual designs, showcasing different approaches to land and structural use. An online survey conducted earlier valued open space integration as one of the priorities for the recreation center. Photos by Rasy Ran

Martin founded FRI in 1995 after her new bicycle was stolen from her home in what she calls “forgotten Far East Dallas.”

Martin was furious, but what could she do? She and her husband, Rob, were faced with a choice — fight or flight?

“Would we move from our home?” she questioned. “Would we stay, accept that this was a neighborhood that couldn’t have nice things? Or would we do something to effect a change?”

They decided to stay and fight.

They found they weren’t alone. Hundreds of their neighbors also wanted to enact positive change in the neighborhood.

The more Martin dug into the issues facing Far East Dallas, the more she discovered the extent to which it was a distressingly underserved community, and that it had been for decades. 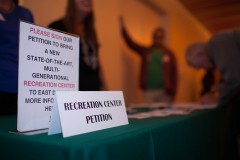 “The roads hadn’t been improved, no sidewalks. None of the basic things that are needed to make a community vibrant and viable,” Martin explains.

Pockets of Far East Dallas were riddled with poverty, violence, drug abuse and prostitution — and still are. Most residents live in the neighborhood’s 60 apartment complexes, and 13 percent live below the poverty level.

“My husband and I bought our home in the late ’80s, and the crime was just escalating,” she remembers.

That year more than 150 neighbors gathered to discuss the lack of social services in a meeting that would help kick-start FRI.

“This is a huge pocket of people,” Martin insists, circling her finger over a map of the area that includes more than 70,000 people.

In 1998, FRI became an official 501(c)3. Martin wrote a Weed and Seed grant, which is a community-based strategy sponsored by the U.S. Department of Justice, requesting federal funding to kick-start the program. It was approved.

During its early years, FRI focused primarily on partnering with the City of Dallas and the Dallas police to curb crime in the area. With FRI’s effort, the neighborhood saw a 25 percent decrease in crime.

In 2003 FRI began pursuing city bond money for a library and rec center. FRI couldn’t get all the funds it needed at once, so the initiative went after money for land first and helped the City of Dallas choose a building site.

The library was fast-tracked immediately. It broke ground in 2010 and opened in 2012.

White Rock Hills Library is an oasis in the desert that features meeting spaces, classrooms, computer workstations and more.

With the success of the library under its belt, FRI began looking for a master developer to design the rec center at Ferguson and Highland roads at the northern tip of the future Trinity Forest Spine Trail.

“It’s not just a rec center,” Martin says. “It’s going to be an economic generator, which this area desperately needs. We see the center as an anchor for mixed-income housing/retail development. We want to completely transform that intersection.”

In 2008, FRI began approaching major developers, but no one was doing anything because of the stale state of the economy.

FRI was at an impasse, and it stayed that way for the better part of two years. The initiative continued to make progress in the community, but a rec center just wasn’t going to happen — not yet, anyway. 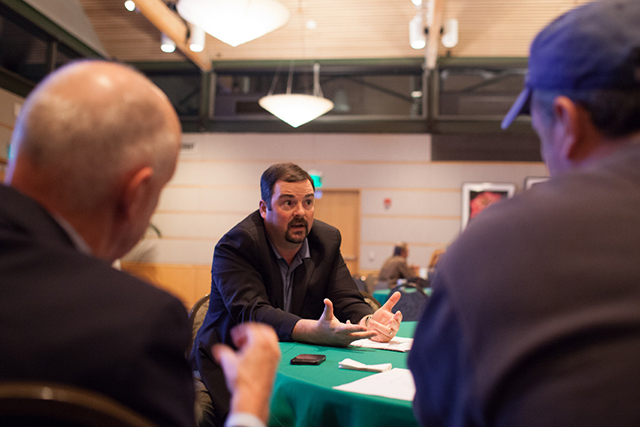 Chappell Jordan, Jacobs Facilities Programmer, addresses some of the questions during the Ferguson Road Initiative November meeting at the Dallas Arboretum. Photos by Rasy Ran

In 2010, FRI offered the community a choice.

FRI had $5 million for a rec center. Dallas’ Park and Recreation Department said it could either build a standard center immediately, which wasn’t ideal — “Our dream has always been a multi-generational center that will serve everybody,” Martin points out — or FRI could take the $5 million, purchase more land and then sit on the project while the economy recovered.

Only one person voted to build the center immediately. Everyone else voted that FRI should buy two dilapidated apartment buildings next door to the property the initiative already possessed.

The city has begun the process of claiming the land through imminent domain. The additional property will expand the project from four acres to about seven acres, with the potential to acquire even more, Martin says.

Where is FRI now?

Along with the recession, Washington killed the federal Weed and Seed program in April 2011, which forced FRI to re-evaluate its priorities.

“We’ve been treading water,” Martin says, “and we made the decision to really streamline and focus on the [rec] center.”

FRI still receives funding from community members, businesses and organizations to continue its effort. It’s not a lot, but it’s enough to pay the bills, Martin says. The initiative continues to seek bond money as well.

“All we’re asking for is our fair share,” Martin explains. “We look at the bond packages, and we look at our percentage. We figure it out, and then we go to our city council member, show them the numbers and say, ‘You owe us this much of that bond money.’ ”

Making the rec center a reality

FRI needs a feasibility study to make the rec center a reality. The team began advocating for funding, and the City of Dallas managed to fork over $125,000 to conduct a study, which FRI launched earlier this year.

At this point, the concept for the rec center is still up in the air.

In early October, dozens of neighbors showed up at an event FRI hosted at the Dallas Arboretum to kick around possible ideas for the rec center.

The primary focus of the gathering was to tap into public opinion on which concepts are most important to surrounding neighbors, such as fitness, classrooms, walking trails, arts and crafts, a community garden or a playground.

After a presentation by project manager Mike Pratl with Jacobs Engineering Group, attendees were asked to vote for their most desired concepts.

“I’d love to start designing right now,” Pratl explained to the group, “but there’s a lot of important information that we need to peel like an onion to really get to the core of what this facility can be.”

A second meeting in early November determined that the four things neighbors deemed most important were a fitness center, trails, a trailhead and an indoor pool.

Those results are not set in stone, of course. FRI is still waiting on the results of the feasibility study and will continue to tap the community pulse to determine the best use for the space.

FRI won’t know how much money the rec center will cost or how long it will take to build until the feasibility study is complete, but Martin figures the project is still at least five to eight years out.

The initiative will have to advocate for more bond money in 2016, but Martin says the team plans to start fundraising before then. Martin hopes that if they’re able to raise enough money independently, the project could be put on the fast track.

“So we’ve got about two years to raise money,” she says.

Learn more On Jan. 27, there will be a presentation of the facility, based on the feedback of the community, at the Dallas Arboretum from 6-9 p.m. Learn more at fergusonroad.org. 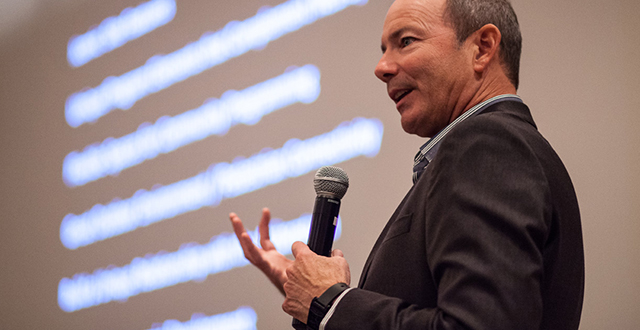 Mike Pratl, Jacobs Project Manager, runs through a gamut of highlights and key initiatives of the recreation wellness center. The typically biannual meeting was hosted by the Dallas Arboretum in Rosine Hall. Photos by Rasy Ran

Article written and published by Brittany Nunn of the Lakewood Advocate.
See more at: http://lakewood.advocatemag.com/2014/11/24/ferguson-road-initiative-dusts-off-its-long-unfulfilled-dream-for-a-rec-center/#sthash.R8YwV890.aeuLbKFH.dpuf